Raised Insulin like growth factor(IGF-1) on the Siemens Immulite. Is it real? (#194)

Introduction
IGF-1 level is used to screen for growth hormone (GH) excess, monitor patients on GH therapy and assess biochemical cure of Acromegaly. Siemens Immulite, a chemiluminescent immunoassay, has dominated the measurement of IGF-1 until recent times. A noticeable shift in the IGF-1 levels has occurred since the change from Immulite 2000 to Immulite 2000Xpi in August 2010.

Objective
To demonstrate the shift in IGF-1 levels and its significance.

Method:
This is an observational, retrospective, cross sectional analysis of 4070 serum IGF-1 measurements performed between January 2004 and July 2012 at PathWest Laboratory Medicine, Queen Elizabeth II Medical Centre in Perth, Western Australia. The monthly mean and median results were calculated with a plot of the running mean. 2941 results were further analysed by 3 time periods. The medians and mean were then compared using the Mann Witney and Z tests respectively. A further 29 IGF-1 samples with a wide range of values were subjected to dilution studies of 1:2.1:3 and 1:4 and compared to the undiluted result.

Results:
Running 5 month average of the median showed a clear upward shift of 38% since August 2010 (Figure 1). There was a statistically significant difference in the medians and mean between period 1 and 3, and period 2 and 3 on both comparison methods (Table 1). The average recoveries for the dilutions were 76%, 70% and 72% for 1:2, 1:3 and 1:4 dilutions respectively. The assay shifted by 38% in August 2010 which aligns with the under recovery.

Conclusion:
Siemens Immulite 2000Xpi has shown a ~40% positive bias in our running laboratory median and demonstrated an unpredictable interference with dilution. The explanation and the implication will be discussed. 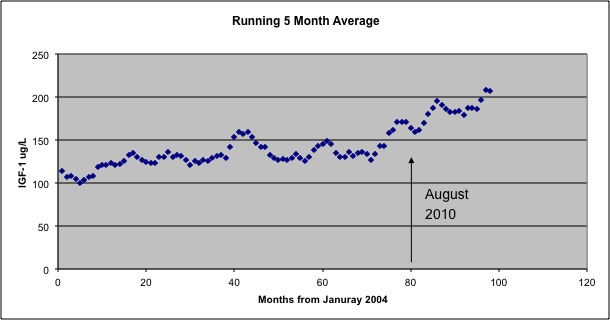